If you’ve been around model railroading in O scale for a time, you’ve likely heard of Norm Charbonneau and his superbly detailed model railroad layout which was called “Greenbrook”. This amazing layout has been featured in the hobby press and it has attained well-deserved legendary status in the world of 3-rail O gauge railroading. Unfortunately, this dreamlike miniature world no longer exists! But how to present a layout that has already been dismantled about ten years ago?

The answer is simple: If you explore Pilentum Television’s website, you will find a section called “Video Upload” on the main page. Every railway modeller has the opportunity to submit video footage of his model railway layout to Pilentum. Markus Lenz, the operator of Pilentum Television, receives the video data via the Internet and takes care of editing, dubbing and image optimization. From many individual video files Pilentum tries to cut and to edit a great presentation for YouTube - free of charge, of course! Thus, everyone is welcome to use the international video channel of Pilentum Television to present his artistry in railway modelling.

And so it came to pass that in February 2022, Norm Charbonneau and Markus Lenz shared old video footage. This video footage is intended to give viewers the memory of one of the most impressive model railroads in the United States. When you watch this video, then you will realize that it is a modeling masterpiece and a testament to what can be achieved in O gauge. 100 percent of his layout - from the rails to the rooftops - has weathering effects ranging from a dusting of soot to a heavy cloak of grime.

From the beginning, Norm Charbonneau assembled toy train layouts directly on the floor. Many years later, he launched into building a thoroughly realistic layout. After receiving a Lionel train set, he started to work on his first layout. He named it “Greensville” and it was nothing more than a chunk of plywood covered in Life-Like grass paper with a train station. After experimenting with HO Scale and N Scale for a brief time, he began to pursue O Scale again. Years later, after he settled in Michigan and fascinated by Pittsburgh’s awesome railroad and industrial heritage, he started building a new layout in the basement of his house.

He began to work on a trackplan and a concept for the layout. Initially, he just wanted to run a lot of trains. Wide curves were a must for some of the larger scale steamers he managed to acquire in the past few years. Furthermore, long straight shots were desired to show off long lines of freight cars. He decided on several separate loops, with two separate yards for storing engines and cars. Scenery should consist of mountains at one end and a large industrial city at the other.

Benchwork for the new layout started in February, 2003. It should become a layout with overall dimensions 22.5 feet by 19.5 feet, which offers enough space for locomotives and rolling stock by Lionel, 3rd Rail, Weaver, MTH and Atlas. The layout was built modularly, then bolted together in sections. The trackwork is all Atlas O, chosen for its realistic looks, ease of assembly and curve geometry. The trackage is finished with Woodland Scenics medium ballast of varying shades. He used locally obtained sand as initial fill between the ties. Mountain scenery consists of plaster-soaked shop towels over screen, with forms made of plywood scraps and MDF. Ground cover is mostly Woodland Scenics’ products along with common backyard dirt. Trees are Scenic Express Super Trees, spray painted black, dipped in diluted carpenter’s glue, then sprinkled with fine turf.

The layout scenery is influenced by the places Norm Charbonneau has lived, namely New England, Pittsburgh and Detroit. He envisioned large concrete and brick factories looming authoritatively over the mainlines. He soon realized that to make anything of the size needed to convey a sense of imposing presence, he would have to scratchbuild. Scratchbuilding also helped fulfill another desire, to make the layout look as unique as possible. While there was a period when all he knew was Lionel and MTH products, he soon discovered the vast selection of detail parts from outfits like Berkshire Valley, Grandt Line, and Model Tech Studios. While often the structure retains some characteristics of original kits, he erected customized buildings featuring add-on Plasticville details and weathering effects. He’s graduated from reconfiguring or kitbashing plastic kits to erecting most of his buildings from o scale parts and various raw materials, including foamcore, hardboard, medium-density fiberboard, stripwood and styrene.

Finally, control is handled by Lionel’s TMCC system. Motive power and rolling stock started off as a mix of Lionel TMCC-equipped train sets. As the layout progressed though, he found himself drawn more and more toward powerful steam locomotives. Lionel’s efforts of late have been very accurate representations of their prototypes and their sounds, especially the RailSounds versions. His fascination with big, scale steam power grew. Driven by a keen interest in the mechanics of steam locomotives, Norm’s collection of big steamers also grew. His trains ran and sounded realistically, but compared to the scenery and structures that he worked so hard to look authentic, his big scale steamers still looked shiny and toy-like. That was the time to transfer the knowledge of kitbashing, scratchbuilding, detailing and weathering to the model trains.

Therefore, he decided that it was time to take the final step into hi-rail modeling. So he focused on making his trains, including steam and diesel locomotives, match the layout’s grimy scenery palette. His main objective was to tone down the color of the trains. He sprayed Polly Scale grimy black, rust and Dirt acrylic paint colors onto the trains. He also drybrushed reefer gray paint on some parts to help highlight the details. By doing so, his motive power and rolling stock looked like they fit into the scenery. Model trains have become part of the scenery, as opposed to being objects untouched by their environment. Norm weathered his steam locomotives by spraying the smokebox and boiler with a grimy black paint color. Wheels, frame and cylinders receive a light coat of dirt-colored paint. He also glues cinders on some running boards along the boiler. 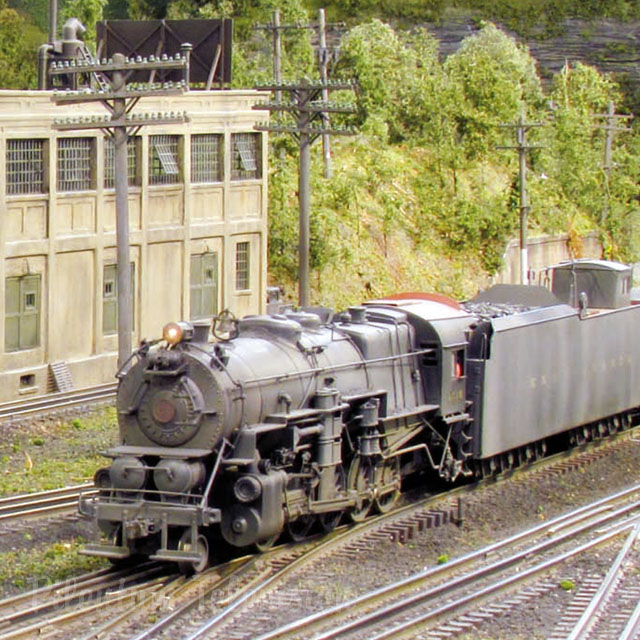 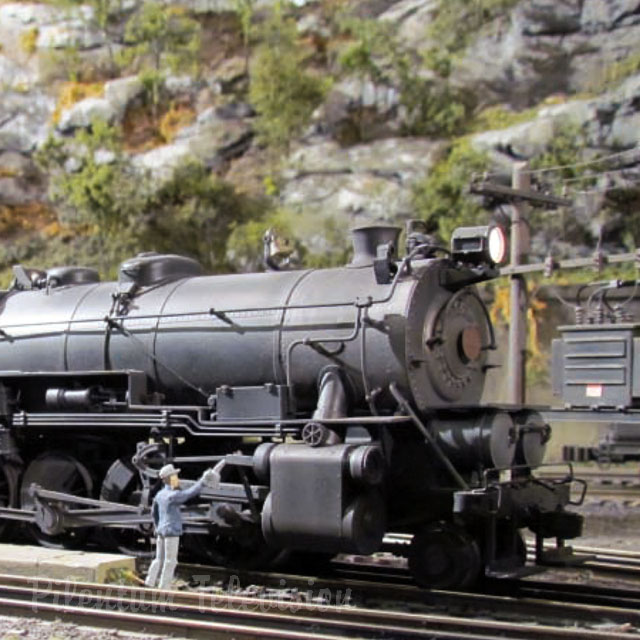 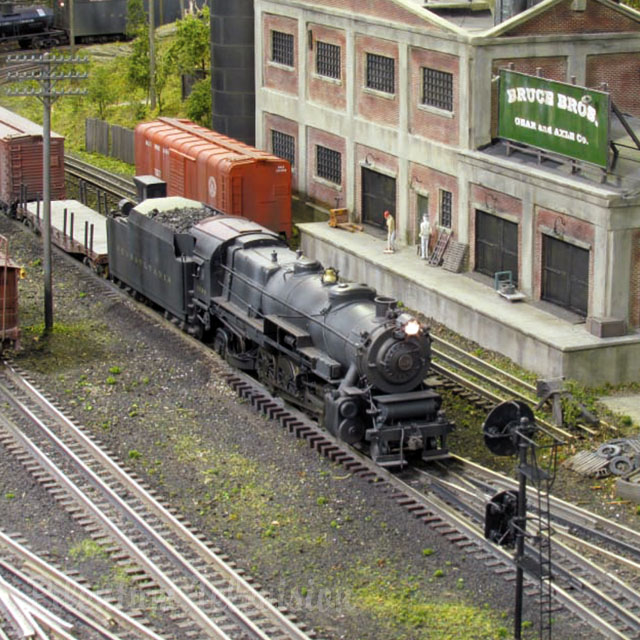 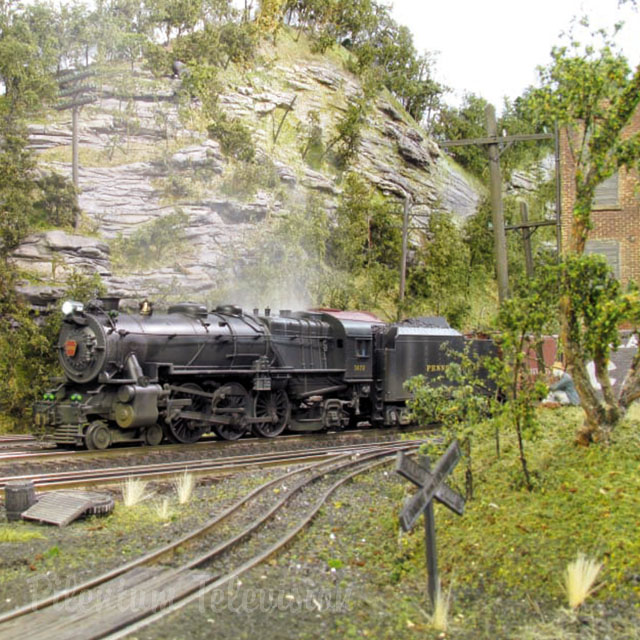 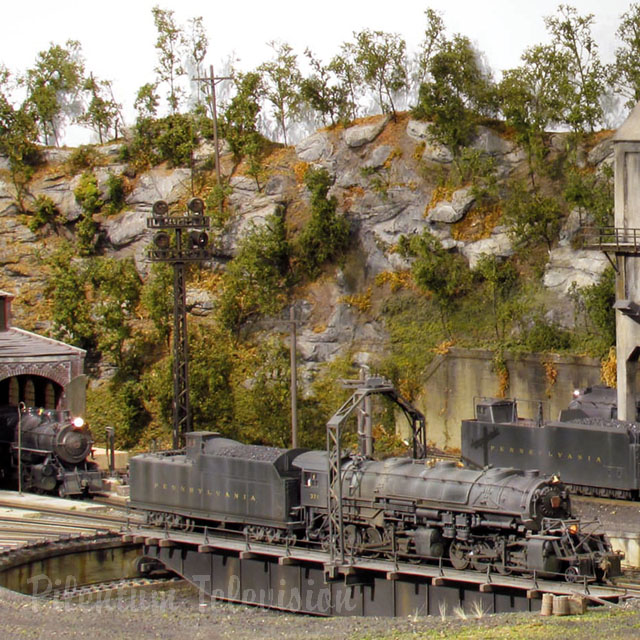 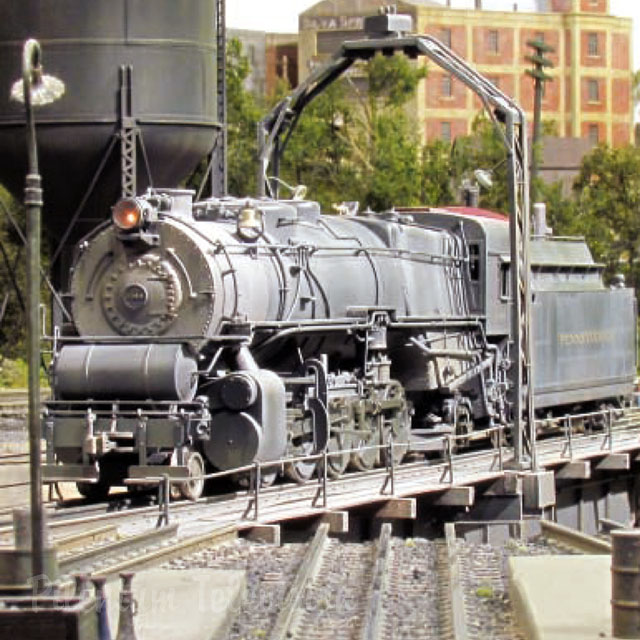 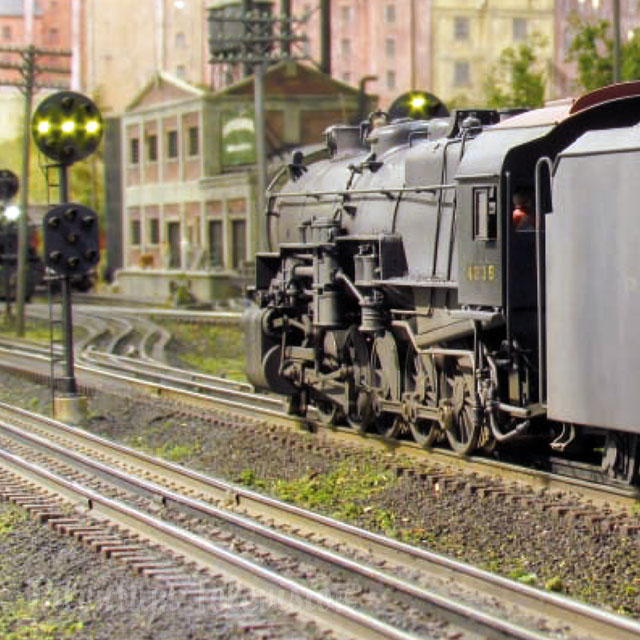 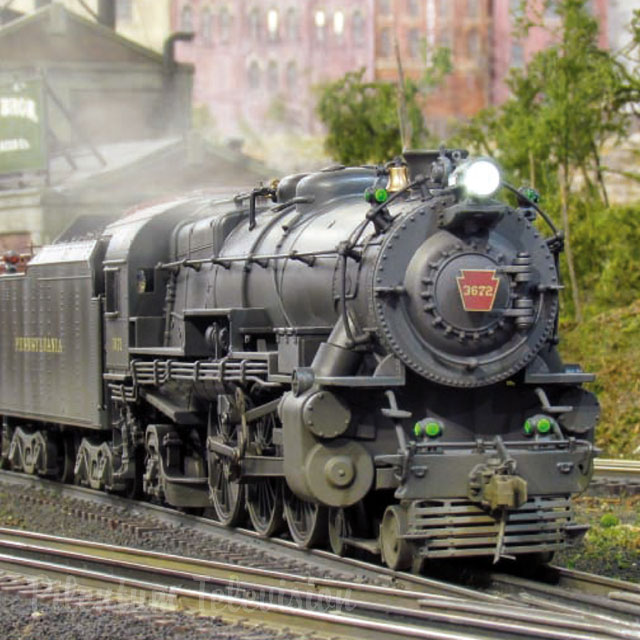 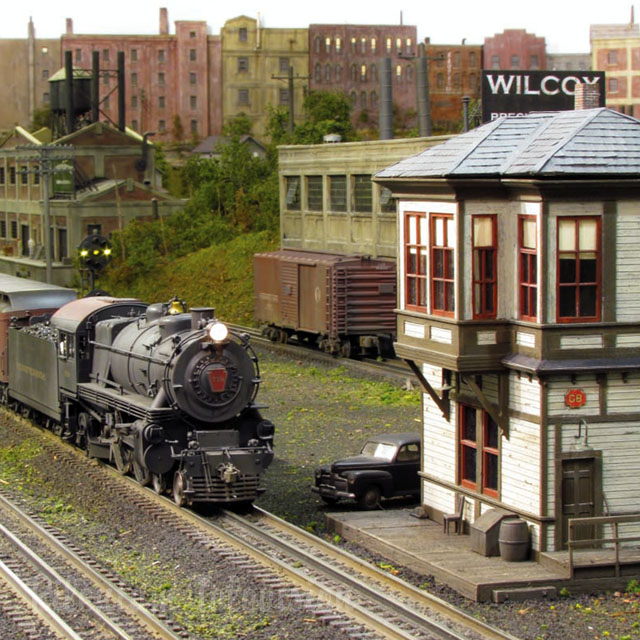