One of the most amazing Märklin model railway layouts in Denmark: Kælderkøbing Modeljernbane

The history of railways in Denmark, its train operating company “Danske Statsbaner” (Danish State Railways) and the characteristic design of Danish diesel-electric locomotives, for example class MY built by NOHAB (Nydqvist & Holm AB), offer great possibilities for rail transport modelling. Because Märklin has copied many of the Danish steam and diesel locomotives in scale 1/87, Jens Krogsgaard - a Danish model maker - started building his fantastic HO scale layout which is called “Kælderkøbing Modeltogbane”. By the way, the Danish word “modeltogbane” or “modeljernbane” means model railway in British English or model railroad in American English.

The model railway layout of Kælderkøbing is a traditional Märklin layout built in the period from 2009 until today. Märklin layouts can be recognized immediately by the three-rail system or by the third rail on the tracks. The track plan of Kælderkøbing was inspired by the superb model railway layout “Modellbahn Altburg” built by Uwe Braun in Germany. The Kælderkøbing layout is 8 square meters in size and consists of a double track main line that ends at each end in a fiddle yard. From the main railway station, there is a single track branch line that ends up in the mountains in the fictive village of Bjergkøbing. The whole layout is controlled by the PC program “WinDigipet” so that seven model trains can run simultaneously on the main line and two model trains on the branch line.

The model railroad layout of Kælderkøbing reflects the same problems of all model railroading hobbyists: Too many trains and too little space. Therefore, Jens constructed a vertical staging elevator. Inside this model train elevator are seven tracks, each 1.4 meters long. It is a great idea for parking model trains.

In the spotlight of this miniature world is the large central station. There are six tracks and platforms for passengers. Due to the digital control we can discover a lot of railway traffic at the main station. Furthermore, we can watch not only Danish trains, but also many German trains. A highlight is the elevator on the platform. This platform elevator was made by Faller but it has been rebuilt so that it can be also controlled by “WinDigipet”. Next to the elevator is the next special feature: A digital arrival sign (miniature display) showing in real time the trains arriving at Kælderkøbing’s railway station. Real time data is sent to the display when a train is heading towards the main station.

Furthermore we can discover a cable car made by Brawa, a Rolling Stones concert or buildings and streets in the city of Kælderkøbing. At the end of the branch line is a rural area including mointains. Below the railway bridge is a small lake where the Danish inhabitants of this miniature world enjoy sailing and fishing. But there is also a tragic fate that we can discover on the model railway layout of Kælderkøbing: The railway employee (flagman, signalman or gateman), called “Leif”, has to work 24 hours a day at the level crossing (railroad crossing). He never has a break and he cannot go on vacation. There are no holidays for Leif: Whenever a train enters the block in front of the level crossing, Leif receives a message from “WinDigipet” that he must close the boom barriers. When a train leaves the block after the railroad crossing, Leif of course has to open the barriers again. 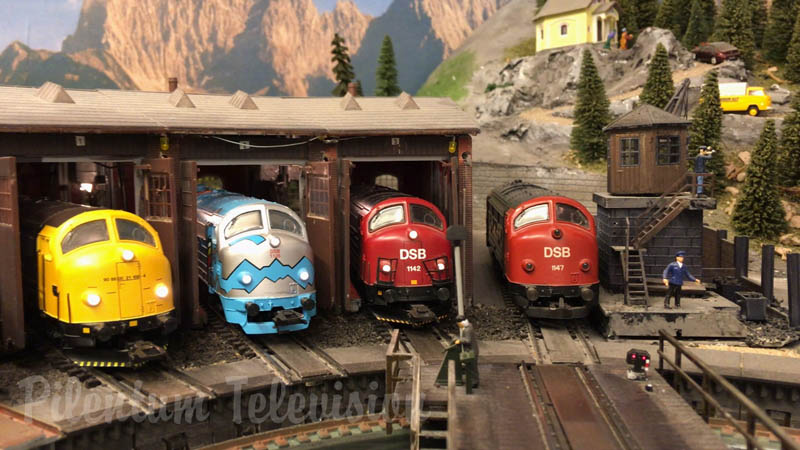 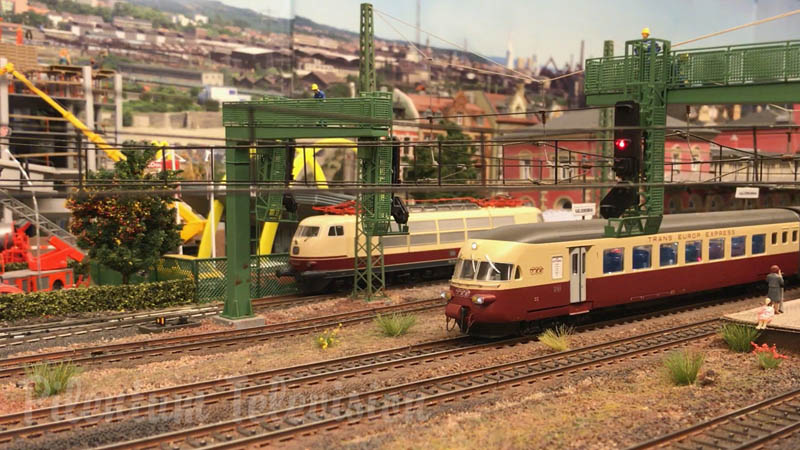 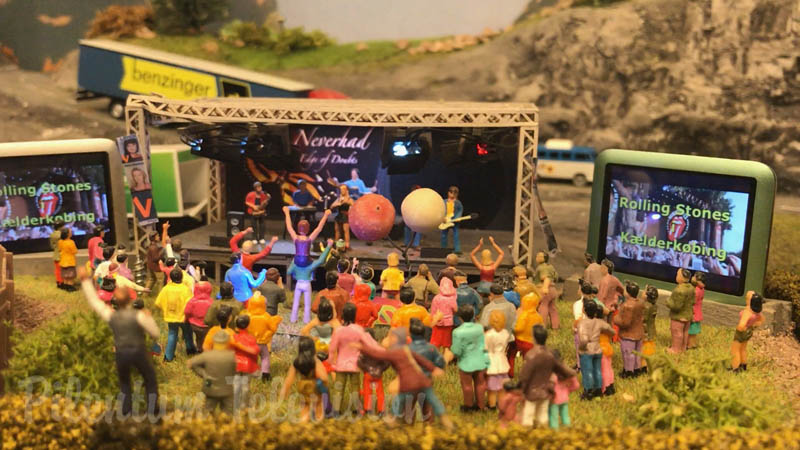 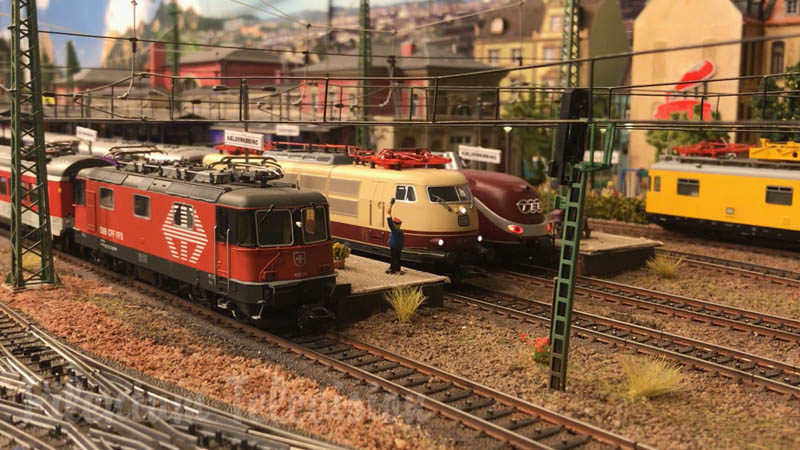 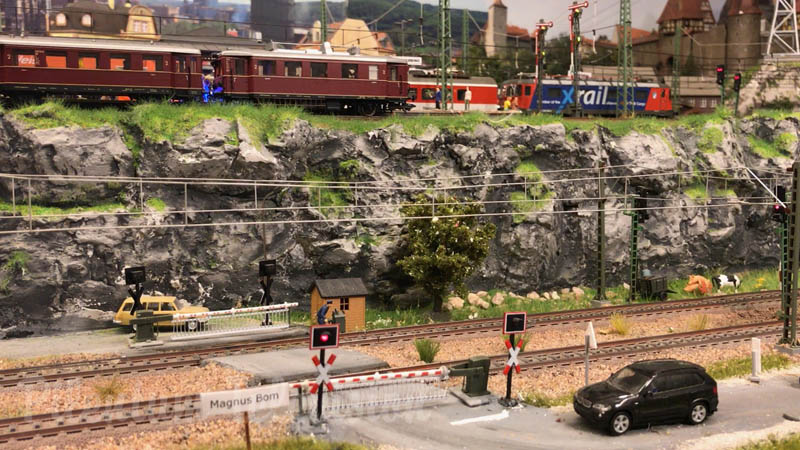 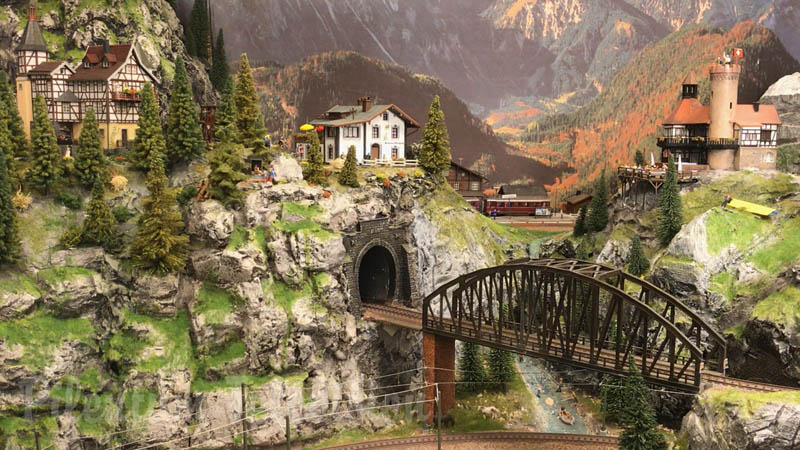 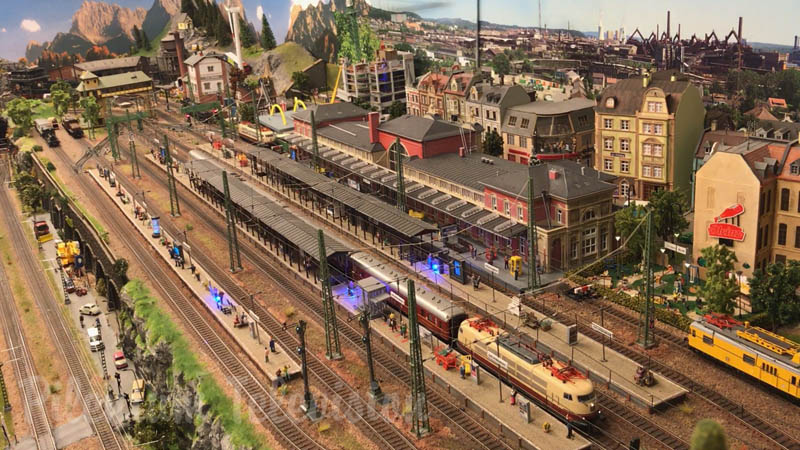 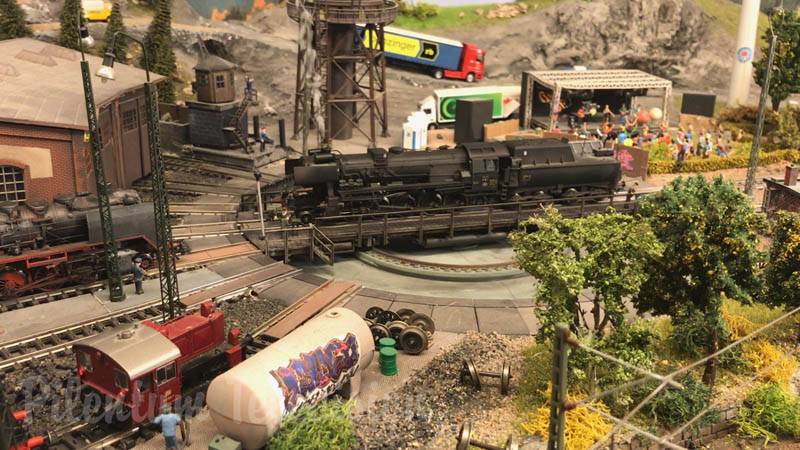 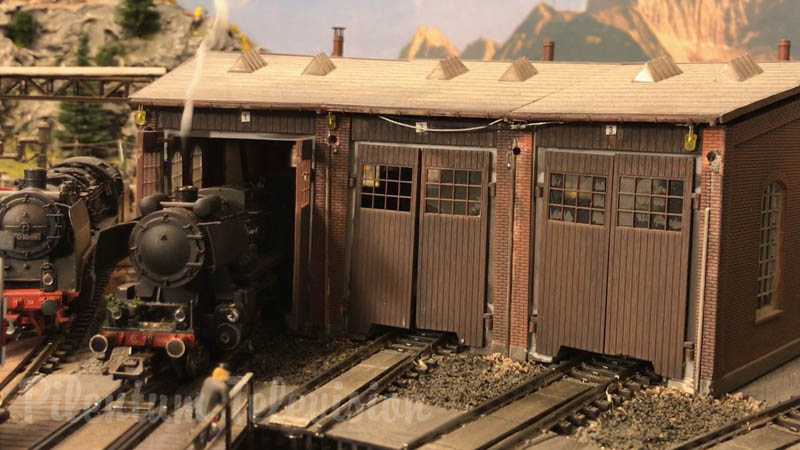 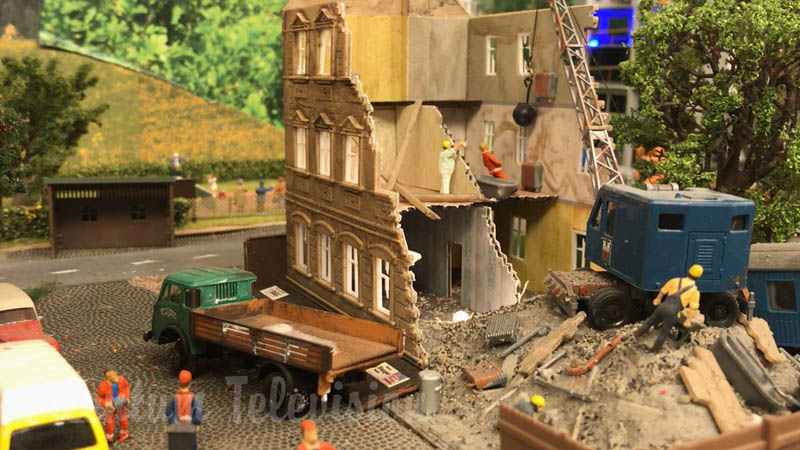 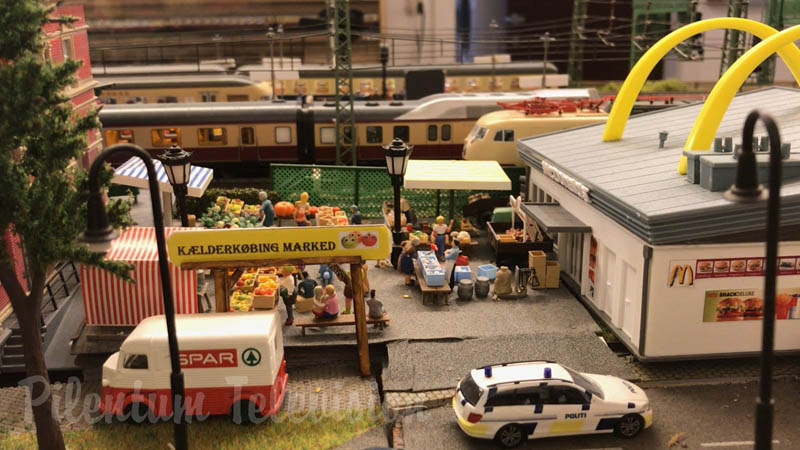 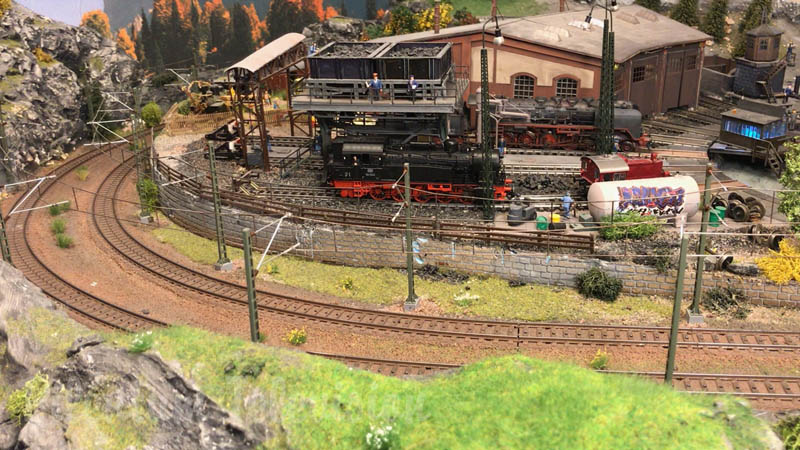 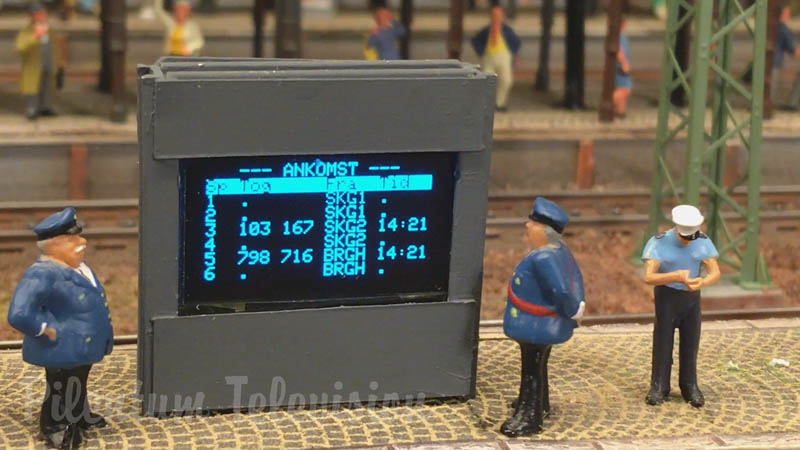 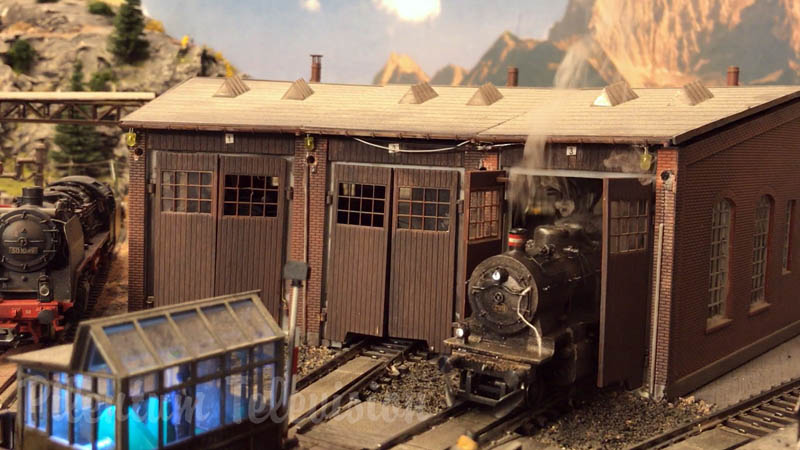 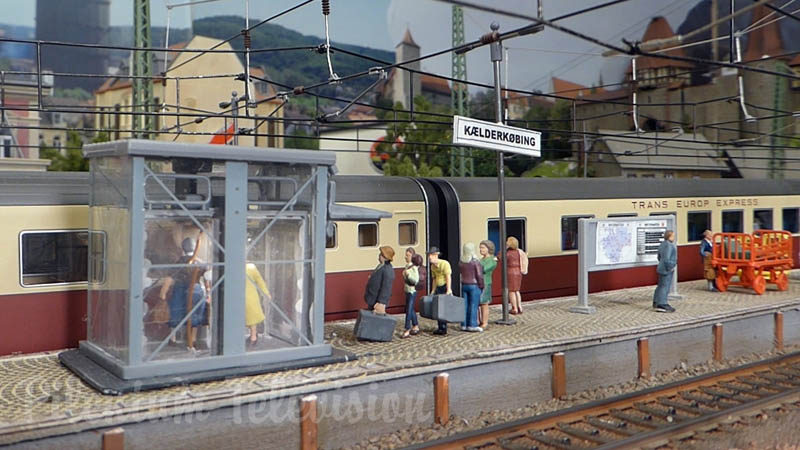 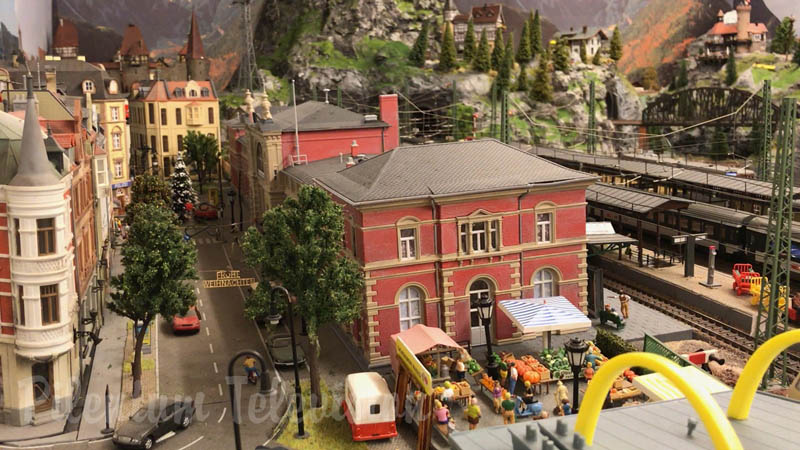 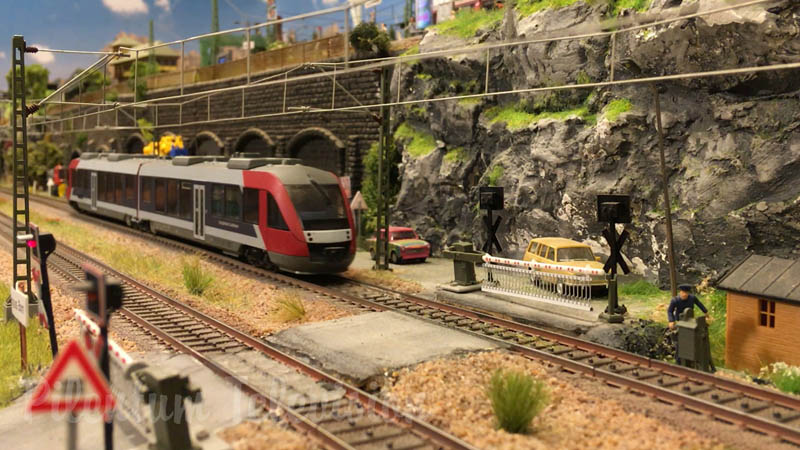 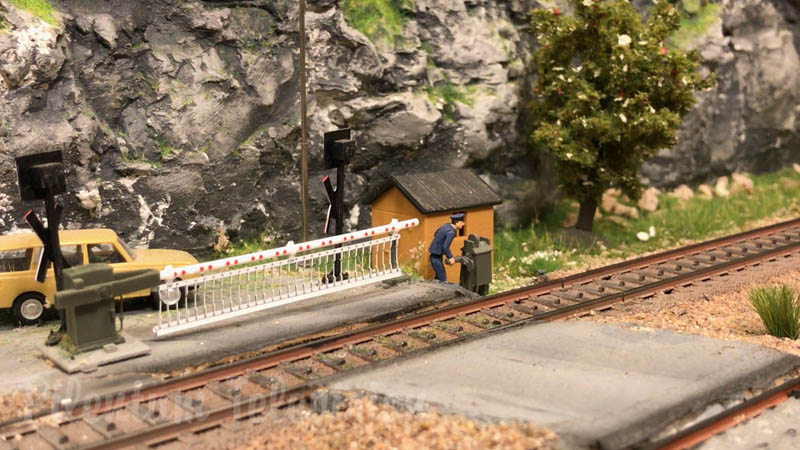 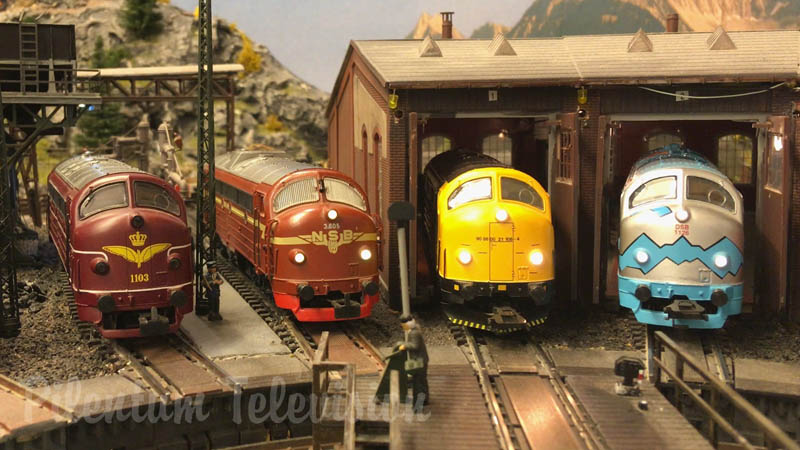 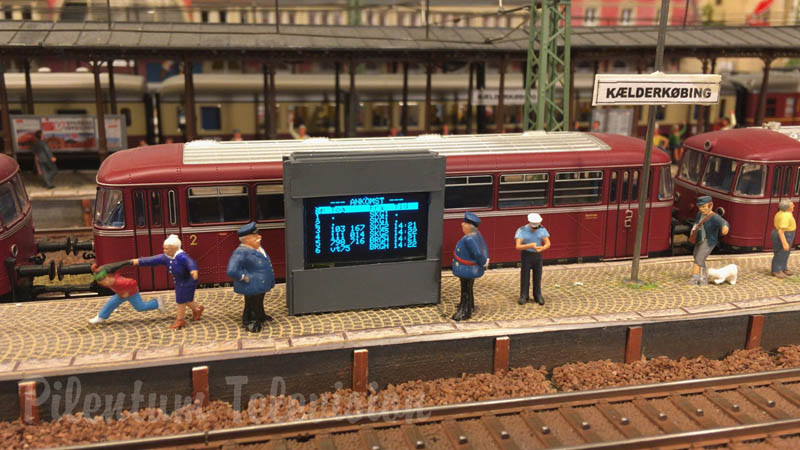 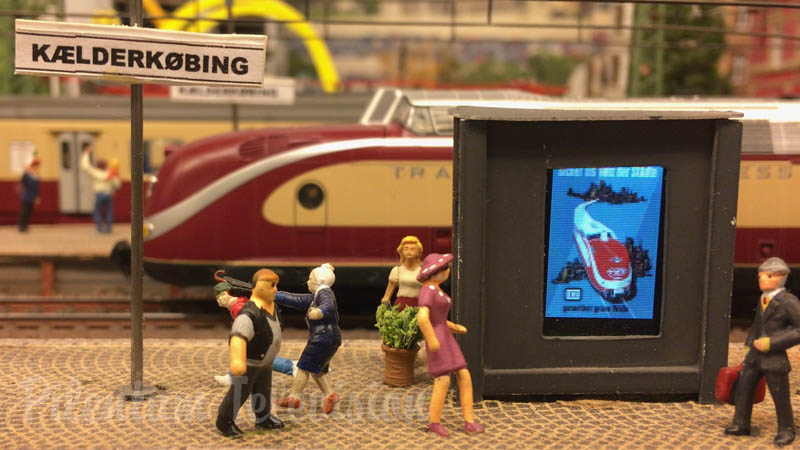 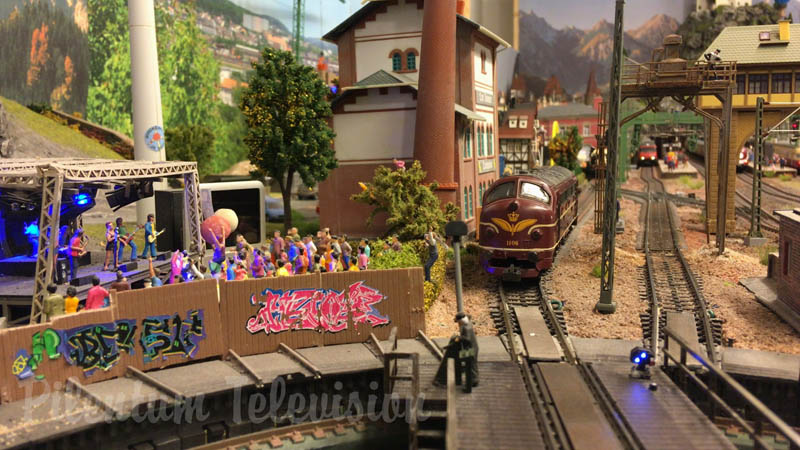